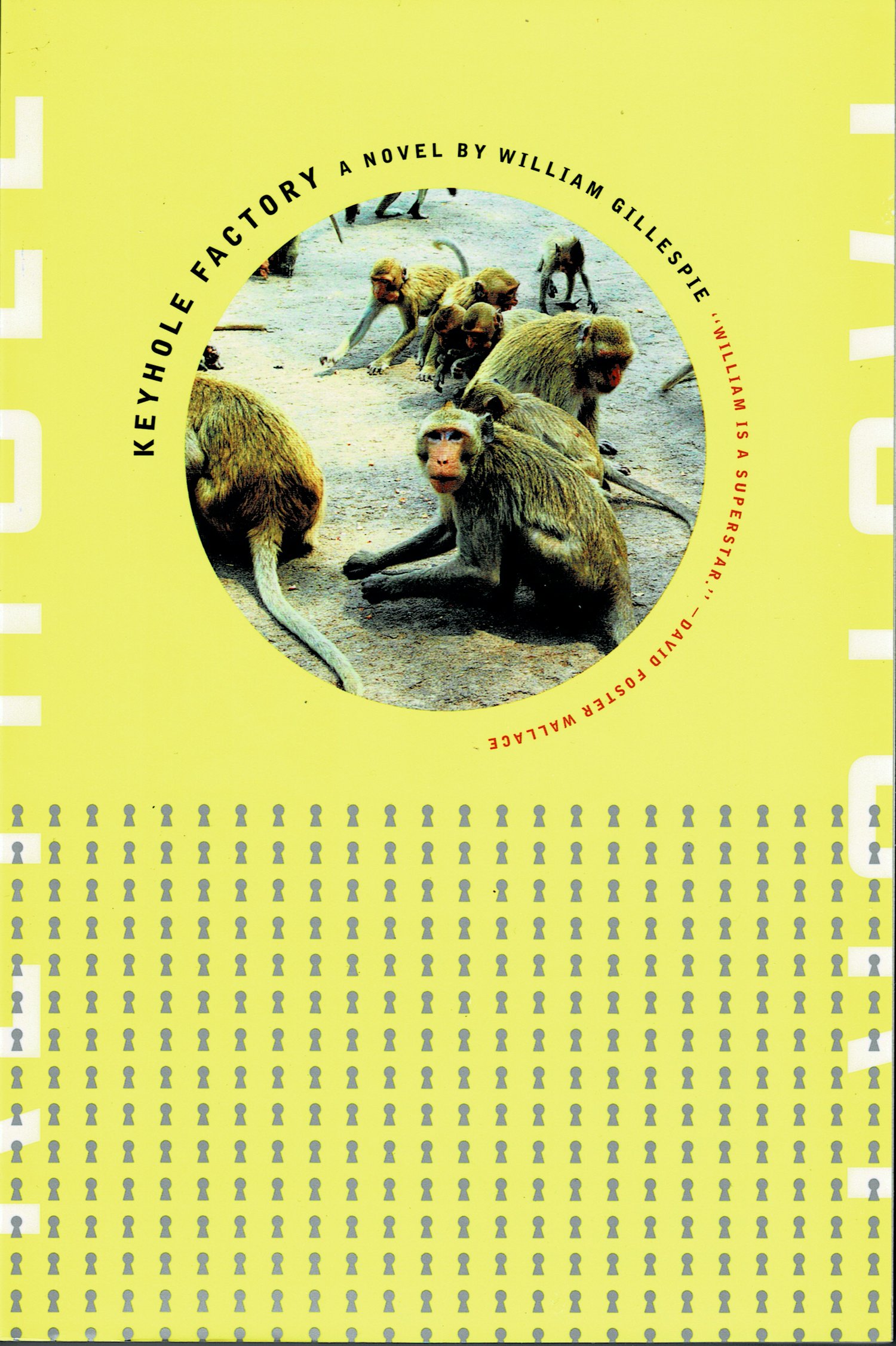 Set in an alternate present that is a slightly, if dangerously, skewed version of our own, Keyhole Factory tracks the interwoven destinies of disparate characters up to and beyond the end of the world-as-we-know-it, brought on by a global super-virus. Beginning with a biting satire of an academic poetry conference, the novel moves on to encompass the stories of a poet-astronaut, a microbiologist contemplating an exit strategy from her high-level job designing biological weapons, a sports-car-driving killer who stages the aesthetic murders of utopian commune-dwellers, and a lone pirate radio disc jockey who may be the last person left alive broadcasting her story to nobody. Allowing form and content to shape each other, William Gillespie pries open the confusion in a moment of total crisis through a narrative web-work technique derived from deranged fiction pioneer Harry Stephen Keeler.

Part imaginative free-for-all and part deeply felt examination of isolation and survival, the individual lives in Keyhole Factory shine through the chaos in all their beauty and tragedy. With his signature wit and originality, Gillespie spins a glittering fever-dream that questions our assumptions about the way we interpret events and our relation to the planet, without ever losing sight of the underlying experience of what it feels like to be a human being in the world we live in today.

This novel about a global pandemic was published by Soft Skull press in 2012. Previously it had a life as a limited edition Spineless Books hardback, of which a few copies remain for sale here.

“...frequently brilliant. Those willing to grapple with its complexities are rewarded with a remarkable work of fiction.” AMERICAN READER

“It’s useful to point out here that much literary experiment is essential playful, fun. And Gillespie’s novel, despite being about disease and the the near total destruction of mankind, has a (ever so deliciously macabre) hopeful side.” NUMÉRO CINQ

“…This is an experimental novel-chunks of poetry interrupt the traditional chapters, graphics appear throughout, and a middle section is horizontal-but the pleasure of the text is fine and true…” LIBRARY JOURNAL REVIEW

"…a violent, apocalyptic story told with an arsenal of narrative tropes.” BOOKLIST

"…you would have to go back to Denis Johnson’s Fiskadoro to find such a purely poetic take on the unthinkable.” PUBLISHER'S WEEKLY

“…by turns bewildering and gorgeous, maddening
and profound…” SMILE POLITELY

“The author’s foray into the inconceivable digs far beneath the trusty surface of cause and effect. He parlays his scientific familiarity to create maddening illustrations showing all we know is consistently less than what we don’t.” BOOK CORNER

“…by turns horrifying, poignant, hilarious, ugly, beautiful, mysterious, poetic, and overall, human, all-too human. Gillespie is able to achieve all this because he is an incredibly talented writer, adept at a wide range of styles, making this novel an exhilarating roller coaster of a read which I recommend without reservation.” DIRK STRATTON

“William Gillespie...is one of the wittiest and most original writers in contemporary American literature.” –Robert Coover

“Gillespie works in a contemporary tradition whose foremost practitioners are members of the Oulipo, the Paris-based group of writers and mathematicians founded in 1960 by Raymond Queneau and François Le Lionnais. Gillespie’s poetry can seem as feverishly wrought as some works of Ian Monk and at other times as stylishly refined as some works of Harry Mathews.” — Doug Nufer, American Book Review

“...a writer who has clearly learned his chops well.” —Eckhard Gerdes, Context

“[Gillespie’s] language here is far from restrained—it is disciplined, wily, animated, resourceful, in turn nonsensical and musical, but supremely vital, dazzling to confront ("read" is not quite the verb), sculpted lines smeary with fingerprints, stunned by the audacity of their own construction.”—Joseph Dewey, Review of Contemporary Fiction

"That this message might sound retrograde to those who feel writers working in multiple media should abandon the literary altogether suggests why the readers and writers who believe in the field of electronic literature and the ethico-political importance of sustaining human readability9 need William Gillespie, DIY publisher and author of affective, meaningful post-digital fictions for the Programming Era."—Eric Dean Rasmussen, Countertext

“I think the world is finally ready for William Gillespie.”–Philip Graham