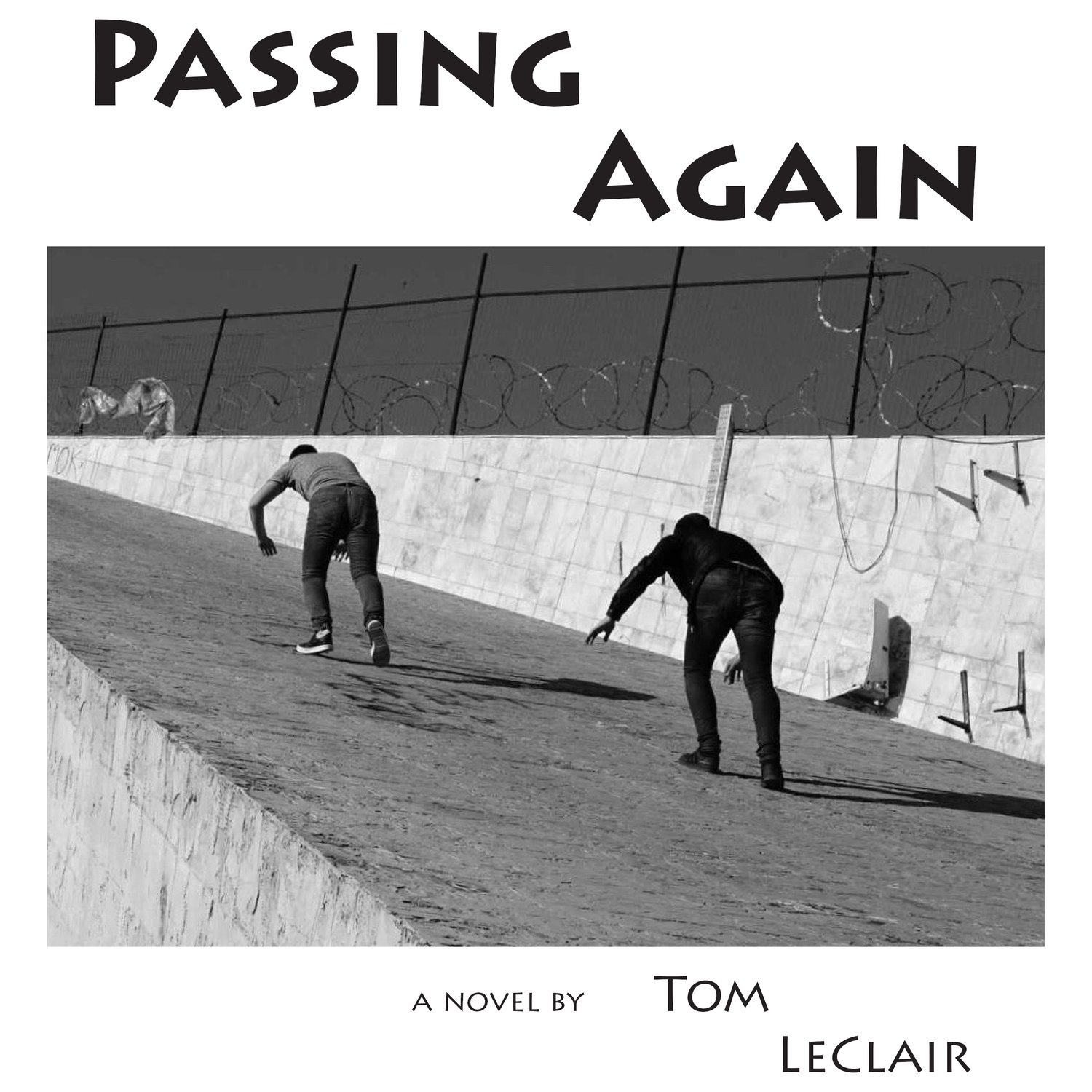 by Tom LeClair and Kinga Owczennikow

Passing Again is double-dealing—a memoir masquerading as a novel or a novel pretending to be a memoir of the doubles Tom LeClair and Michael Keever, former pro basketball player and the putative author of LeClair’s four earlier “Passing” novels. Real author and invented character go on a buddy road trip to Athens, Greece, where both their lives changed decades ago, to recover the past. And to arrange futures of revenge and sex they have concealed from each other. But their ulterior purposes are side-tracked in Athens when they discover that a real group influenced by an ecoterroist made up in Passing Off plots to bring down the Parthenon. Once a hero in Greece, Keever is convinced by the philhellene LeClair to again employ deception to save the monument.

Passing Again is appropriately and militantly hybrid, a splicing of old facts and new illusions, a revenge comedy and love story, Greek travelogue and Socratic dialogue, an archive of autobiographical texts and fifty photos, a literary entertainment and green vision. Although Passing Again is a stand-alone work, in it fiction does double other fiction, life imitates fiction, and life even duplicates life as this final “Passing” novel proves once again the value of Keever’s long-held motto and LeClair’s constant practice: “No game, no gain.”

Note: This “second” edition of Passing Again
is a corrected and expanded edition of the book
published by Hybrid Press in 2021.

TOM LECLAIR is a former National Book Award judge and a professor emeritus at the University of Cincinnati. He is the author of three books of literary criticism, the political commentary Harpooning Donald Trump, and seven other novels:

Passing Off, Passing On, Passing Through, Passing Away, Well-Founded Fear, The Liquidators, and Lincoln’s Billy. LeClair has published hundreds of essays and reviews in The New York Times Book Review, The Nation, BookForum, The New Republic, The Washingon Post, The Daily Beast, Full Stop, and many other nationally circulated periodicals.

He also co-edited with Larry McCaffery a collection of interviews with American novelists entitled Anything Can Happen.

For movie deals, LeClair can be reached at: Thomas.LeClair@uc.edu.

“Passing Again is a wonderful, Pynchonesque face of torn memories and of shadows that refuse to disappear.”
—Jerome Charyn

“For all its flashy ball-handling and dead-on outside shot, Passing Off is a deeply literary work of art and politics, probing identity, representation, ecology, and, of course, our desperate, down-to-the-buzzer game of words.”
—Richard Powers

“In the fierce unfinished business of Kurdistan, Tom LeClair has found the documentary edge and human center that makes Well-Founded Fear a resourceful and moving work of fiction.”
—Don DeLillo

“Entertaining, funny, serious, and death-ridden . . . Passing On takes on issues—with humor and irony—not many a serious novelist tackles these days. It’s a winner, worth a shot.”
—American Book Review

“The business of America may be business, but too few fine novels prove it. [The Liquidators is] a brilliant exception. To the tiny shelf of classic workplace writing, add this meditation on failure, fiscal and metaphysical. . . . The workingman blues, as if sung by some truck-stop Homer.”
—Kirkus

In the Loop
The Art of Excess
What to Read (and Not): Essays and Reviews
Harpooning Donald Trump

Anything Can Happen (with Larry McCaffery)